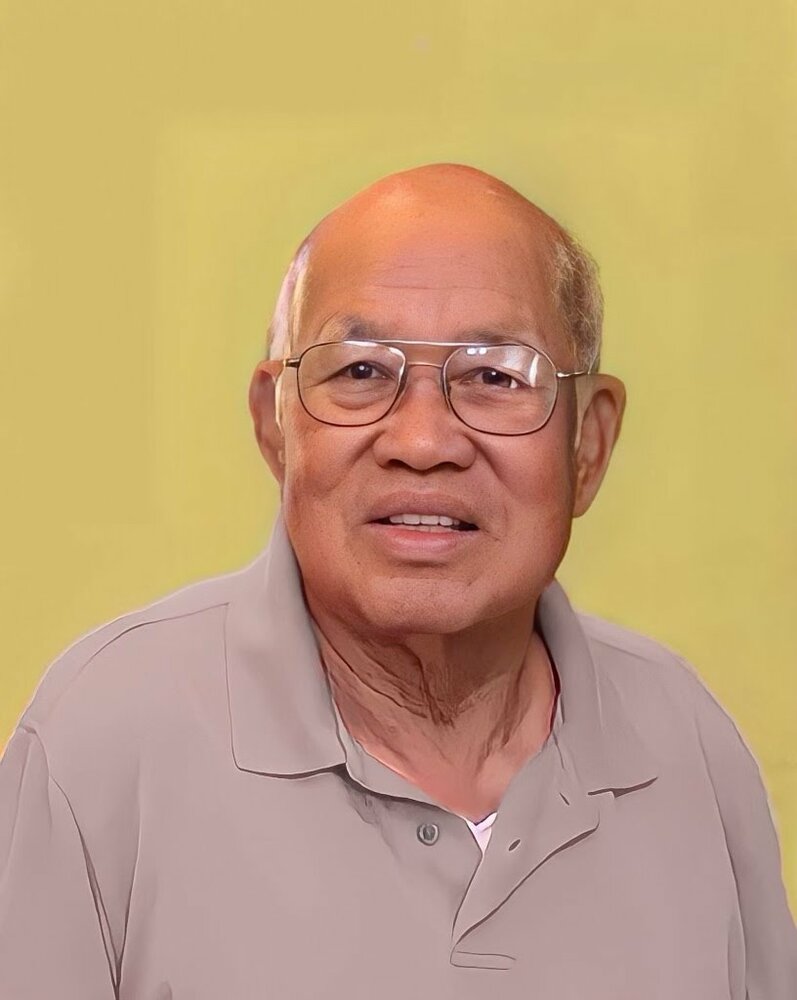 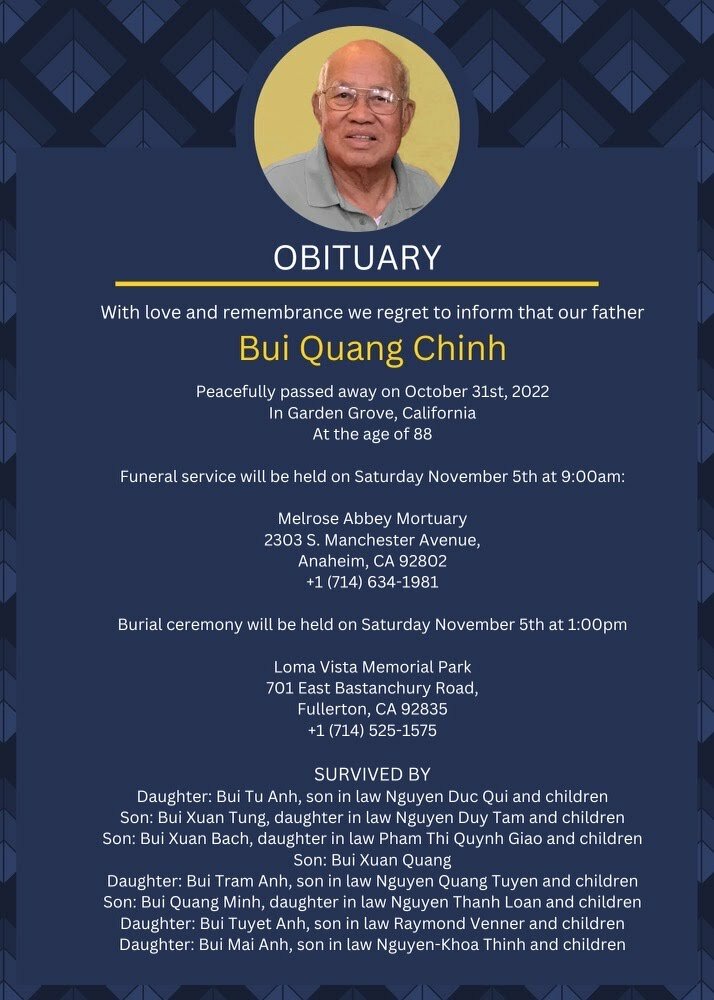 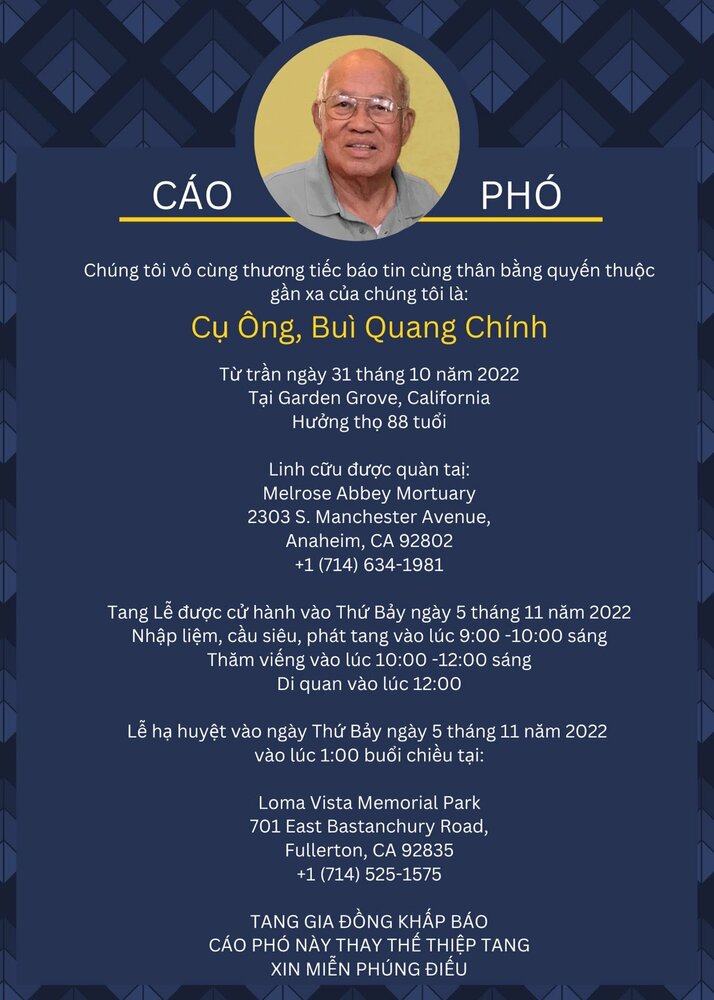 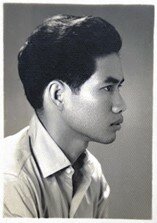 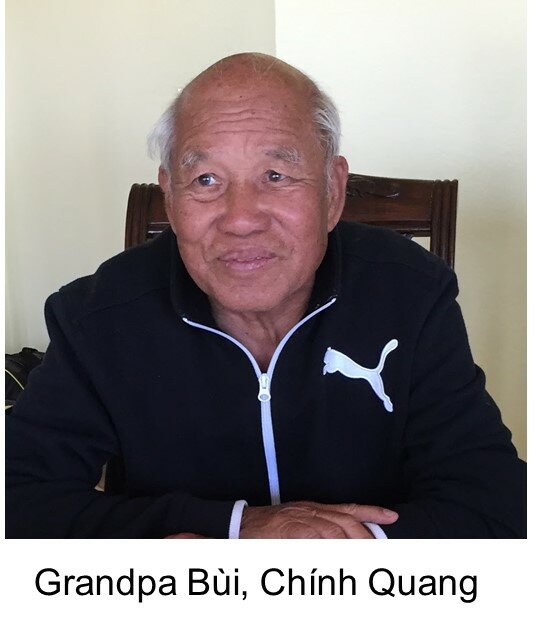 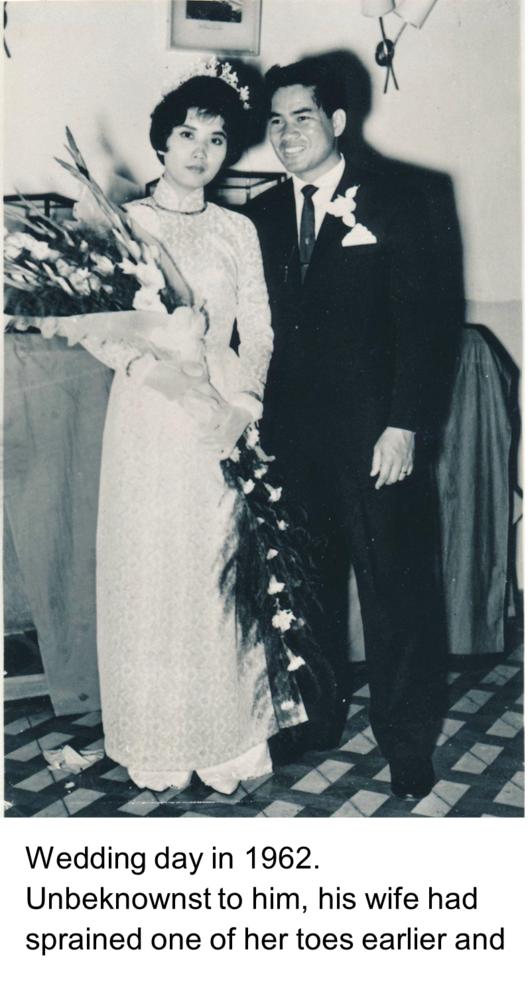 Please share a memory of Chinh to include in a keepsake book for family and friends.
View Tribute Book

● Born as the older identical twin on May 1st, 1934. Place of birth: Lạng Sơn, Vietnam. He was the second eldest brother of 13 siblings.
● Since his father was assigned a position in a rural location, he had to leave home at the tender age of 7 or 8 to live with a foster family so he could attend school. This turned out to be a lucky break because while he and his brothers were away at school, a grenade was released into the bedroom he shared with his brothers. His home was attacked while the family was sleeping because his father refused bribes and thwarted illegal lumbering activities. Fortunately, no one was seriously hurt.
● As young children, the four eldest (eldest brother Hùng, twin brothers Chính & Trực, and little sister Lạng) were trained in martial arts and sword fighting by their father. Chính was reportedly sister Lạng’s preferred sparring partner because he pulled his punches when practicing with her.
● During the Japanese invasion of Vietnam, along with his eldest brother and his twin, he accompanied their father to defend a strategic bridge leading to the forest their father was assigned to oversee. When the Japanese platoon arrived, the commander in charge saw only a young father with his 3 young sons, armed with only swords. The Japanese commander called off the attack out of admiration and respect for their bravery. He and his brothers were probably only in their early teenage years at that time.
● While he was still a child, he got access to a boat full of mangoes. He stayed in the boat and gorged to his heart’s content. Afterwards he was very sick & developed a lifelong extreme distaste for mango.

SIGNIFICANT LIFE EVENTS
● As a young man, he advocated for Vietnam independence & participated in peaceful demonstrations against French colonization of Vietnam. He was a patriot but also a peaceful man and refused to resort to violence. Unfortunately, he could not avoid being drafted and was dragged into the conflict. However, he was able to figure out a way to do the least harm to his fellow countrymen: by joining the South Vietnam Air Force, working as a test pilot, a flight instructor, and rescue missions’ pilot.
● He attended air force training in France, United States, and Morocco.
● From 1975 - 1980, he was in “re-education” camp war prison. He was kept in northern Vietnam.
● Migrated with his entire family to the US in 1986.
● Stoically, he worked two jobs for years to make ends meet, enabling his children to pursue their education full time.

FUNNY AND INSPIRATIONAL STORIES/QUOTES
● To impress his soon to be wife, he flew his reconnaissance plane fixed wing propeller driven L-19 by her school, where she was a chemistry professor, at a very low altitude each time he went back from flying practice. One time, he flew so low that his L-19 clipped an electricity wire, scaring bystanders. He was given a warning after that incident.
● He was a devoted and faithful husband throughout his marriage. He was nicknamed “sợ vợ” by his friends for his refusal to stray. When his wife was ill with terminal cancer, he lovingly nursed her throughout the last five years of her life, all the while continuing to work a full-time job taking care of patients with intellectual & developmental disabilities.
● He was a modern thinker and a devoted father. He believed his daughters were as capable as his sons academically. He encouraged and facilitated the education of all his children equally. He did all he could to give his children a chance to better themselves through education. He even told the boys to put on shirt even on very hot days to show respect to their mom & sisters because “according to him, everyone should be treated equally; so, if your sisters can’t walk around the house without shirt, then you can’t either.”
● When it came to parenting, he believed that parents need to consider the individual child when raising their children. There is no one mold that will fit all.
● When asked what his favorite subject was, he said math because it didn’t involve much writing.
● In his 70’s, he once said “Đời người chỉ là một quan điểm”, loosely translated as, a person’s life is just a single perspective.
● He was a life-long scholar. He once said the day you run out of things to learn is the day you might as well die.
● Recently, when asked to talk about his family picture, he named each of his siblings and their achievements. When he got to himself and his twin he smiled and said, “those two are the stupidest of the bunch”.

To send flowers to the family or plant a tree in memory of Chinh Bui, please visit Tribute Store
Saturday
5
November