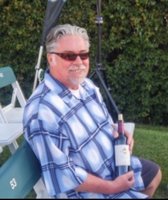 Jimmy Lee Mackelrath was born in Los Angeles to the proud parents of Fred H. Mackelrath and Betty M. Mackelrath on July 19, 1947. Raised in Hawthorne, CA, went to school and once graduated, enlisted in the United States Navy during the Vietnam War. He was on spy ships as a 'Radar Man' and traveled to Hawaii, Africa, Australia, Japan, Philippines and New Zealand. Jimmy was awarded a National Defense Service Medal and a Vietnam Service Medal. Jimmy was married and had three sons, Eric, Terry and Jason. He is also the grandfather of Dimitry, Celeste, Nyomie, Jersey, Sierra and Jayanna, and great-grandfather of Leo and Lance, uncle to Tod, Everett, Elizabeth and Catherine, Ryan, Rory, Ryles and Sebastian. Jimmy met the love of his life Roylene in 1998 where he spent the rest of his life traveling, going to concerts and making memories every chance they got. He was here a short time but made a big impact.